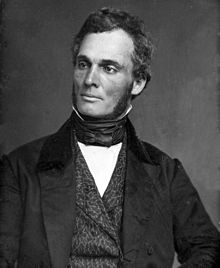 Robert Purvis’ family moves from Charleston to Philadelphia, planned as an interim stop. William Purvis wanted to relocate his family to his native Scotland, but died in Philadelphia, leaving a fortune to his sons. Robert Purvis became an important abolition and civil rights leader in Philadelphia. His father, William Purvis, was a wealthy white businessman, and his mother, Harriett Judah, was mixed race. In Charleston, the Purvis couple was only able to have a “common law” marriage due to restrictive laws. Robert Purvis, although frequently mistaken to be “white”, defined his identity as a black man and a kindred spirit with his grandmother, whom he said was a full-blooded Moor. His wife, Harriet, was James Forten’s daughter. Together, they formed the Vigilant Committee in the 1840’s to aid fugitive slaves. Harriet was also a founding member, with her daughters and Lucretia Mott, of the integrated Philadelphia Female Abolition Society.