Although frequently overshadowed by New York City, Philadelphia offers an important lens for studying America’s national heritage around civil rights. In addition to being the birth place of the Declaration of Independence and the formation of the national government, Philadelphia in the 19th century was a prominent urban center that had strong Southern sentiments and alliances, and was a hot bed of ethnic immigrant and nativist tensions. At the time that the city was home to the largest free black community above the Mason Dixon Line, it also had growing immigrant populations from many countries and cultures and rising new industrial and civic leaders. The city was the setting of what America had become, since its founding. And, the racial, cultural, religious, social and political tensions of 19th century Philadelphia reflect America’s continuing challenges today. The city also became an important place where Martin Luther King, Jr. was educated and built alliances for his 20th Century civil rights efforts. Consequently, Philadelphia provides a framework for both comparative study and civic learning to explore a more comprehensive view of America’s civil rights narrative.

Thirty years ago, historian Gary Nash published his groundbreaking work on Philadelphia’s early free black community, Forging Freedom: The Formation of Philadelphia’s Black Community, 1720-1840. The book examines America’s earliest large free back community in the North. It reveals the civil rights struggles this community faced to build both families and community and define their place in America. Their journey was a turbulent one, as Philadelphia free blacks organized churches, established neighborhoods and social networks, sought education for their children, and built political consciousness and economic competency. Importantly also, the community cultivated strong leaders among their ranks, who not only worked to abolish slavery, but also fight for citizenship rights that were often fleeting. Before Nash, the telling of their story was often focused on abolition. However, for these individuals, abolition was but one part of the critical issues of their concern. Philadelphia, the “City of Brotherly Love”, was not so “brotherly” when it came to its black citizens. William Wells Brown, a frequent visitor to the city, said: “Colorphobia is more rampant here (in Philadelphia) than in the pro-slavery, negro-hating city of New York.”

Most early black residents of Philadelphia believed that they had a legitimate claim as Americans in the United States. Many were newly emancipated…some had relatives still held in bondage, which kept them connected to slavery and the abolition cause. However, as free people in the North, they themselves faced many other challenges due to racism and segregation in Philadelphia and the country that Wells Brown observed. Even the more fortunate of them, like wealthy sailmaker, James Forten, found their voting rights stripped away, when the Pennsylvania legislature took away black voting rights for those who met the property requirements. The 1838 Pennsylvania Constitutional convention was originally held with the primary goal of reforming tax and ownership restrictions placed on voting, in order to enable the impoverished citizens of Pennsylvania to vote. However, intense political turmoil targeted black Philadelphia and thousands of white citizens petitioned the convention to restrict suffrage to “white freemen” only. Leaving blacks with financial means, who previously voted, being taxed without representation. The community was also confronted with attempts by the American Colonization Society, founded in 1816, to repatriate free blacks back to Africa. Colonization was strongly rejected by black Philadelphians in 1817 at a meeting drawing over 3,000 at Mother Bethel church. By 1830, Philadelphia free blacks joined with free blacks in other northern American communities and formed an activist network, known as the Negro Convention Movement, through which they focused their political and civil rights consciousness. In 1831, Philadelphia was the host site of the first convention convening.

The recent rediscovery Octavius Valentine Catto, who was in the second generation of free blacks in Philadelphia after Forten, brings to light the frequently neglected connection between America’s civil rights stories of the earlier period and the subsequent struggles in the 20th and in current centuries. This long arc of the civil rights history is often treated as separate occurrences, not broadly within a long timeline. This portal seeks to correct this presentation by undertaking to reveal the networks that African Americans built across the nation and across generations to address inequities.

Octavius Valentine Catto was a 19th century African American civil rights activist, whose short life spanned the thirty-one years preceding the Civil War and the early part of Reconstruction America. He and his peers are representative of the subsequent young leadership that was built within the community. They are also the generation that came to adult life in the decisive years that our nation as whole tested what equality and citizenship should really mean. For Catto’s generation of black men, the Civil War provided the pivotal moment for shifting the meaning of the U.S. Constitution. Historian Eric Foner calls this time America’s Second Founding. The shift was not just in the ways blacks would be defined by federal and state laws, claim their citizenship rights, and seek opportunity. It was a fundamental shift in defining the meaning of citizenship and equality for everyone. And, it is what we are grappling still with today. Pennsylvania, as a border state, and Philadelphia, as a border city, were crucial in effecting this change and Catto was among the leaders, who enabled this shift.

Although there was great hope for a “new day” in America among Catto and his associates, their efforts also deepened racial tensions that led to Jim Crow laws, policies and practices, as well as anti-black violence and intimidation in both the North and the South in the years following the Civil War. As these regressive actions and forces grew, African Americans and their white allies formed new civil rights and social service organizations in an effort to advance the ideals of equality, citizenship and opportunity. Philadelphia also served as an important center for this activity. 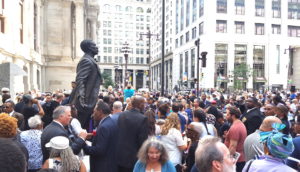