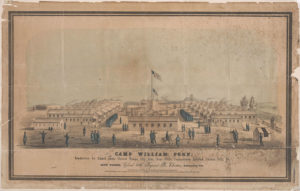 In June of 1863, a call went out for volunteers to serve in the Union Army because Confederate forces were moving toward Pennsylvania. Though Congress had authorized the enlistment of black soldiers in July of 1862, it took the Emancipation Proclamation and mounting Northern losses to initiate the recruitment and training of black soldiers. Octavius Catto eagerly joined the campaign to gather black troops and assembled ninety volunteers, including many of his Institute for Colored Youth (ICY) students. With the approval of Principal Ebenezer Bassett for the ICY students to participate, Catto and the other volunteers traveled to Harrisburg by train to offer their services to U.S. Army. The commanding officer in charge, however, rejected the group, stating that they were not volunteering for the required enlistment period and sent them back to Philadelphia. It is also suspected that he did not want black soldiers in the effort. In spite of this, Catto and others again took on the mission of recruiting black soldiers, when later that month orders were given to form ten companies of colored troops, each to be made up of eighty men. To fulfill this order, Camp William Penn was quickly established just north of the Philadelphia border in Cheltenham Township. Located on land owned by anti-slavery crusader Lucretia Mott’s son-in-law, the Camp officially opened on July 4th, 1863. Nearly 11, 000 men were eventually trained at Camp William Penn, the first training camp ever set up specifically for black troops. Many of the enlistees had recently fled slavery. Despite serving their country, black soldiers often received harsh treatment both at the Camp and on visits to Philadelphia. Indeed, the first regiment trained at Camp William Penn was not permitted to parade through the city because of racial tensions and for fear of violence against the troops.

Major Louis Wagner, a Union officer injured at the Battle of Bull Run, was the commander of Camp William Penn. Like Wagner, all of the officers in charge of United States Colored Troops (USCT) at Camp William Penn were white. Louis Wagner would become a close friend and ally of Catto, serving as head of the Pennsylvania National Guard, in which Catto reached the rank of Major and Brigade Inspector General for for the 5th Brigade that included all black regiments. Wagner, who would later serve on Philadelphia’s City Council, was the main organizer of the large public funeral given Catto at his death and had his body lay in state at the Pennsylvania Armory. Many whites living in the area surrounding the Camp William Penn were Quakers with abolitionist tendencies and welcomed having a training ground for black soldiers in their midst. Lucretia Mott was a frequent visitor, sometimes bringing baked goods and other times sharing religious exhortations.
Although there is no record of Octavius Catto visiting Camp William Penn, notable African American leaders like Frederick Douglass and William Still did make the trip. Many friends and family members of the recruits, however, were unable to visit Camp William Penn because trains and streetcars did not allow black riders. The absurdity of this situation was one of the most compelling arguments for desegregating Philadelphia streetcars, a campaign for which Catto led.

Camp William Penn closed on August 31, 1864. By that time, black regiments had largley proved that black soldiers, though paid less and treated severely, could be as courageous as their white counterparts. Camp William Penn-trained 6th Regiment’s valor was on full display at the Battle of New Market Heights in Virginia. Sadly there, sixty percent of the men perished at the battle. Two of the survivors were awarded the Congressional Medal of Honor for their bravery under fire. Valor was on full display. However, there was some disagreement within the medical profession treating Civil War soldiers about the fitness of black soldiers. These views were to shape national policies for future recruitment and assignments for blacks in the military ranks well into the beginning of World War II.

Though he personally had not served in the Civil War like his two brothers, Octavius Catto received the honor of accepting a regimental flag on behalf of the Twenty-fourth USCT. Catto showed his patriotism, commitment and valor as a recruiter, political organizer and exceptional orator during the War, something his family encouraged as his particular role. On April 15th, 1865-shortly after the Civil War had finally ended, Catto gave a speech to a crowd of thousands of Philadelphians, both black and white. He worked tirelessly in the Pennsylvania Equal Rights League and also joined the Pennsylvania National Guard, serving with many former black Civil War veterans who had trained at Camp William Penn.

During the era of Camp William Penn, the area now known as LaMott was mostly farmland. Today it is an overwhelmingly African American neighborhood within Cheltenham Township, an inner-ring suburb of Philadelphia. There is almost nothing left of the sprawling camp other than historical markers and the emblem of a USCT soldier on neighboring street signs.