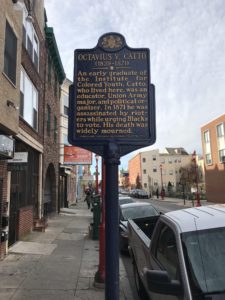 At the time of his death, Catto was living in this boarding house at 814 South Street with eight people. The owners of the home were Thomas and Anna Bundy. The 1870 U.S. Census shows that the tenants were: William and Anna Proctor, who were most likely married and Anna could possibly have been the Bundy’s daughter; Octavius, whose name was misspelled (Oadavus); Jos Green; Jessie Bailey; and John Welch. All were African American. All of the lodgers were in their twenties. It is not certain how long Catto lived in the Bundy’s home. We do know that by age 21, Catto was no longer residing with his parents. The Philadelphia City Directory in 1860 had him listed living away from his parents at 1041 Lombard Street. By then he was pursuing his profession as a teacher. It was common for young adults, especially teachers, to live on their own as boarders. Apartments were also scare in the neighborhood where Catto lived. Also by then, Catto’s father and his mother along with three younger siblings, were in New Haven, Connecticut, where William Catto was working as a Presbyterian minister. By 1867, a City Directory had Catto listed at 814 South Street.

814 South Street was a convenient location for Catto, just two blocks away from the Institute for Colored Youth, where he taught, and attended church at St. Thomas African Episcopal Church. In 1871 his residence was near to his bank, the Freedmen’s Bank at 919 Lombard Street. The bank was one of the last places Catto visited during the violence plagued Election Day of October 10, 1871. When he was instructed by his National Guard commander to intervene to try to mitigate the election violence that day, Catto withdrew money from the bank in order to purchase a gun. On his way back to his home to put on his military uniform, two white men approached Catto. One of these men, Frank Kelly, pulled out a pistol and shot Catto just steps away from his home.

During Catto’s era, South Street from 6th to 23th Streets was an important part of the 7th Ward, the center of the African American life in Philadelphia. In 1899, W. E. B. DuBois in his landmark study, The Philadelphia Negro, studied deteriorating conditions in the community due to segregation, overcrowding, and poverty. He also uncovered that the community had a strong memory of Catto and his many contributions. The 7th Ward remained an epicenter of black community life into the early 20th Century. In the 1960’s along South Street, artists and other “urban pioneers” were attracted to the low prices and vintage housing stock of South Street, and transformed the street into a bohemian enclave and then over the next few decades it was developed into a commercial area with shops, restaurants, and entertainment venues attractive to teens and young adults.

Today, South Street is one of the hottest real estate markets in Philadelphia, not the slum conditions DuBois observed in 1899. Though Catto’s home at 814 South Street remains standing today, it has been renovated into Attractive Beauty Salon, a hair and nail salon.