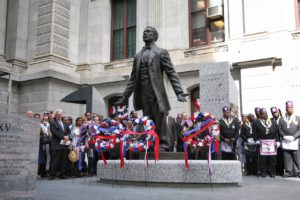 Branly Cadet’s vision was to create a design in dialogue with Philadelphia’s City Hall, a prominent and historically significant civic landmark in the middle of Broad Street. The memorial immerses viewers in a visual drama, celebrating and presenting O. V. Catto’s courage and service to Philadelphia, our State (Pennsylvania) and the nation. His young life was lost in defense of one of our nation’s most precious rights – the right to vote. His efforts produced “America’s Second Founding” (Eric Foner) andleft Americans with the Constitutional legal basis that became the foundation for the Modern Civil Rights Movement.