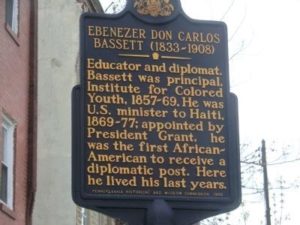 This location is the last residence of Bassett. He was among the most prominent and influential African American men of the 19th Century. His tenure as head of the Institute for Colored Youth, were formative years for the young O.V. Catto. Bassett was not only a mentor to Catto, shaping his views of the world and his intellect, but he also became a colleague and friend, working together on the recruitment of USCTs and for equal rights.