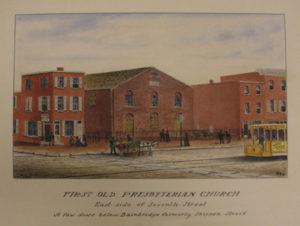 First African Presbyterian Church, the nation’s oldest African American Presbyterian Church, located in Philadelphia’s Old City was founded in 1807 by formerly enslaved John Gloucester. This church is the fourth of the first five early African American churches founded in the city of Philadelphia. Among its most prominent and most remembered pastors is Rev. William T. Catto, who compiled the first written history of the church. Catto served as church minister from 1854 to 1859. In 1860 William Catto and his family of younger children moved to Connecticut. Octavius and his older siblings remained in the Greater Philadelphia region. Today the church is at 4159 W. Girard Avenue.