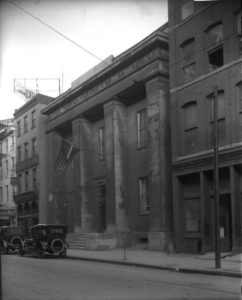 In the early 19th Century Philadelphia was known as the “Athens of America”, where many learning institutions were formed building off of the American Philosophical Society’s concept for “Promoting Useful Knowledge”.  Among these institutions was the Franklin Institute of the State of Pennsylvania for the Promotion of the Mechanic Arts. It was founded on February 5, 1824 by Samuel Vaughan Merrick, a manufacturer with a keen interest in engineering, and William H. Keating, a geologist and professor at the University of Pennsylvania. Within three years of its founding, the Institute promoted knowledge and the exchange of ideas through public lectures, a high school, a library, public exhibitions, and a research journal, and many of these endeavors remain core activities to this day. During the organization’s first century, the Institute offered classes in mechanics, drafting, and engineering, and promoted science and invention by recognizing the accomplishments of inventors.

The Institute was an important force in the professionalization of American science and technology through the nineteenth century. However, it also maintained a color barrier and was opened only to white visitors and members. The James Forten and Robert Purvis families tested this racial barrier, after James’ son, Robert, was awarded the Institute’s prestigious Scott Medal for his nine-foot telescope. As countless other schoolchildren had done, two children in their families sought admission to see Robert Bridges Forten’s telescope and were turned away at the door.  Inventor Robert was denied Institute membership, although his name to this day is listed among the long list of Scott Medal winners, which include Jonas Salk, Marie Curie and Orville Wright. Teachers at the Institute for Colored Youth also tested the racial policies of the Franklin Institute. In a desire to sharpen his science background, Robert Campbell bought tickets for a series of lectures in 1856. The Franklin Institute was slow to respond and finally would only offer him a free pass to the Institute’s exhibits as a science teacher. Recognizing this as a slight, Campbell declined this offer. Fourteen years later in 1870, Octavius Catto became the first African American paid member of the Franklin Institute. He was given membership due to his employment as a science teacher at the Institute for Colored Youth. This signaled an end to the rule that had blocked Robert Forten.  However, the change was not without controversy. The dean of Jefferson Medical College, chemist B. Howard Rand, threatened to cancel his lecture if blacks were allowed to attend.  The Institute board stood firm in its decision to admit Catto. Rand cancelled. Other Philadelphia cultural institutions, however, did not follow the Franklin Institute’s lead.  They kept to their rules of barring blacks, including African American lecturers.