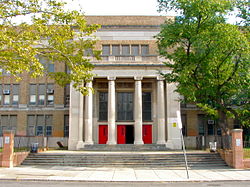 Catto and General Louis Wagner became colleagues and friends working on United States Colored Troops (USCT) recruitment. Wagner volunteered to be commander of Camp William Penn, where he oversaw the training of over 11,000 African American troops for the Civil War. It was during this time that Wagner encouraged Catto to join the Pennsylvania National Guard, where Catto was promoted to Brigade Inspector General with the rank of Major.  This made him the highest ranking African-American in the military services at that time. Upon Catto’s assassination, General Wagner lead the effort to honor him with the largest public funeral that was held in Philadelphia after Abraham Lincoln’s. It was at the Pennsylvania Armory, where Catto laid in state for public viewing. Later, General Wagner issued orders to commemorate Catto with a medal that would be awarded to Guard members who were judged most dedicated, brave and efficient in their duties like Catto. The Philadelphia School District named this school as a memorial to Louis Wagner.