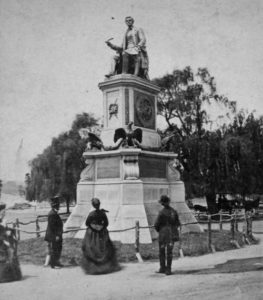 The dedication of this monument in Fairmount Park, honoring Abraham Lincoln, was one of the last grand events Catto attended before his assassination. The dedication was attended by a large outpouring of 50,000 people, including military groups of which Catto was among. He led his 12th Regiment Fifth Brigade in a march, most likely from the PA Guard Armory to the monument, wearing his blue officer’s uniform. As the brigade’s Inspector General, Catto most likely rode on horseback, as he led his brigade of African American soldiers.

Philadelphia was one of the first cities in the nation to erect a monument to Lincoln after he was assassinated on April 14, 1865. The Lincoln Monument Association, chaired by Mayor Alexander Henry and under the auspices of the Union League, was formed on May 22, 1865, and in a little over a year raised $22,000. Sculptor Randolph Rogers was awarded the commission for the memorial. Rogers rendered Lincoln in the naturalistic style that was prevalent in mid-nineteenth-century portraits.  Seated, with quill in hand, Lincoln is shown just having signed the Emancipation Proclamation. In 2001 the monument was moved from its original location on an island in the midst of Kelly Drive to this more pedestrian-oriented site just east of the roadway.

At the time of his death, Lincoln was highly regarded by African Americans and much admired by Catto. Catto had been among the mourners, who passed by Lincoln’s coffin laying in state at Independence Hall. He was now closely affiliated with the Republican Party.