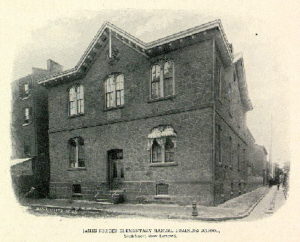 As a child, Octavius Catto’s father enrolled him in the Lombard Street Colored School, the only public grammar schools for blacks in Philadelphia. It was there that he met Jacob White, Jr, who became is closest friend and fellow social justice activist, before they both moved on to the Institute for Colored Youth. The Lombard Street School was shabby and crowded with 446 students and three educators. The principal, James Bird, a white man, alone taught 199 students. Unlike most white educators at the time, he was highly respected in the African American community because of his treatment of black students. Catto, like most of the students, had to walk to school, because blacks were barred from riding the omnibuses, unless they were white passenger’s servants. His walk was a mile and a half from his home on Kessler Alley.

In 1872 the school started to have night classes for African American men and women. The school was closed in 1891 due to low attendance, then reopened the following year after being renamed James Forten Elementary Manual Training School in an effort by the Republican Party to curry favor with the African American community. James Forten was a Philadelphia businessman and activist in the early 1800s, who fought for equal rights for all people and the emancipation of enslaved African Americans. He was born free, but his grandparents were enslaved. He made a fortune in the emerging American capitalist economy by opening a sail-making shop that employed both black and white workers. Before the James Forten School opened, the building was completely renovated and the educational staff was revamped. Anna Hallowell, who was on the Board of Public Education, had the idea to turn the school into a manual training institution, and she was in charge of organizing the school. Hannah Fox, who had been a principal in Philadelphia schools before, was made the principal and all of the new teachers were highly trained.

Although it was originally an all African American school, later children of other races were admitted. Classes included cooking, sewing, and singing. The neighborhood in which the school is located is rich with African American history. The Mother Bethel African Methodist Episcopal Churchis a historic landmark that is located across the street from the building where the Lombard Street Colored School once stood. Today, it is gentrified neighborhood with many townhouses and Starr Garden park and playground across the street.