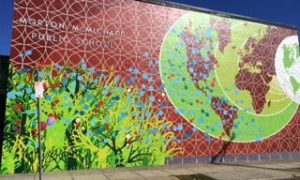 Named for Morton McMichael a founding member of the Union League of Philadelphia and the League’s 4th president. After the Civil war, McMichael was elected the first Republican Mayor of Philadelphia, serving from 1866 through 1869. McMichael presented Octavius Catto, Robert Purvis, Frederick Douglass, Robert Forten and others at the Union League with a banner honoring their work in the passage of the 15th Amendment in Pennsylvania.