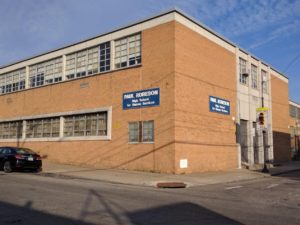 4125 Ludlow Street in West Philadelphia is now occupied by the Paul Robeson High School for Human Services. However, the location was previously the O.V. Catto Disciplinary School. Sometime in the 1980s, the Catto school relocated to 43rd and Westminster Streets, and its name was changed to the E.S. Miller Remedial/Disciplinary School. E.S. Miller closed in 2012, as part of a restructuring of the Philadelphia School District.

At present, Paul Robeson High is nestled within the vicinity of a variety of small businesses, such as auto-parts stores, a car wash, and some eateries, as well as residences. According to a historic map of the area in 1962, the school used to be surrounded by many more homes and places of religious worship.

Historically, the Catto Disciplinary School’s student population consisted of almost exclusively troubled black students. In a Philadelphia Tribune article dated May 2, 1970, the school’s then principal, Willie Toles, discussed the seeming racial bias in terms of the students that were sent to the school: “We do have ten whites here, out of 187 enrollees…[b]ut…it’s definitely true that black children are sent here much more readily than whites.” Toles then describes his observation that many of the white students who got into trouble at schools are sent by their parents to private institutions, such as those controlled by the Catholic Church. The school suffered from some of the same racial inequalities that Catto himself fought against during his life, namely inequity of opportunities and resources for black students.

Dr. Donna Sharer, an educator who taught at E.S. Miller from 1992 to 1996, recounted her memories of E.S. Miller. She explained that it was the landing spot for students who were expelled from other schools. These students ranged from the 5th to 12th grade, and the school was boys only until the beginning of the 1996-97 school year when it was made co-ed so that a separate all-girls school could be closed and its student populace incorporated into E.S. Miller’s. Sharer explained that, “[a] number of students continue to call the school ‘Catto’ because they told me it sounded “tougher” than Miller. They didn’t know who Catto was – the sound of the name made the [difference].” She elaborated further that her students “pronounced the name ‘Kate – O’ with the accent on the first syllable.”

Karen Asper Jordan, a civil rights activist from North Philadelphia who attended high school in 1960s also had some memories of the Catto Disciplinary School: “We pronounced it ‘cay toe’ not ‘cat toe.’” The disciplinary schools were Caine, Boone, Carmen and Catto… Every neighborhood had someone to go to any of these schools because they got in trouble… As I remember I knew a little of his (Catto’s) history, can’t say how much. Knew he was colored, educated activist, was killed and had a building named after him. That’s my young mind.”

As can be seen from both recounting, most knowledge about Catto had generally been forgotten within the Philadelphia School District population, despite that the Disciplinary School was the second school to be named for Catto. Additionally, few public schools today incorporate learning the history of the person that their school is named
for in their students learning.