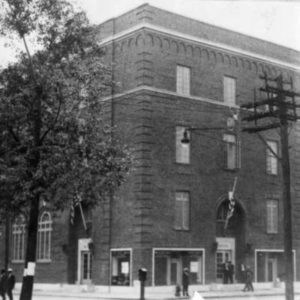 The Improved Benevolent Protective Order of Elks of the World (IBPOEW) was established in 1897. the Order is an African American fraternal order modeled on the Benevolent and Protective Order of Elks, a white established fraternal order organized in 1868 in New York City. IBPOEW began the white organization refused them admission. For this reason, Arthur Riggs and B.F. Howard founded a separate organization in Cincinnati in 1898. Riggs and Howard based their order’s rituals on the B.P.O.E.’s. Initially the Black Elks caused a bit of controversy and were even sued by the B.P.O.E for using the same animal mascot. By changing their name slightly (to the International Benevolent and Protective Order of Elks of the World or I.B.P.O.E.W.), the Black Elks were able to avoid further challenges. The Order claims descent from the Free African Society, the first formal black society in America, founded in 1787 as a mutual aid society by Absalom Jones  and Richard Allen in Philadelphia.  In the early 1900s the Black Elks began to spread throughout the country.  By the early 21st century, with 500,000 members and 1500 lodges in the world, the IBPOEW claims to be the largest black fraternal organization.

In 1903, a chapter of the Black Elks opened in Philadelphia in the lower end of the 7th Ward.  In 1906, the Black Elks of Philadelphia added the name of Octavius V. Catto to its lodge chapter name and has been called the O.V. Catto Lodge ever since.  Like Catto, the lodge stood for the education, protection, and rights for those in his community. The Elks hoped that they could keep Catto’s legacy alive through their charitable works. The Lodge created a banner, which is now housed in the collections of the Philadelphia History Museum.

In 1926, the O.V. Catto Lodge began work on their new location, at the corner of 16th and Fitzwater Streets in South Philadelphia and dedicated its new building in 1929. They were able to finance this venture thanks to an interest free loan from Forrest White Woodard, the boss of an illegal gambling operation.  The new location also boasted a boxing ring, a basketball court, and a rooftop garden, making it an important hub for the community. The lodge currently resides at 4932 N. Broad Street.