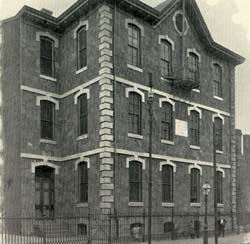 “It is the duty of every man, to the extent of his interest and means to provide for the immediate improvement of the four or five millions of ignorant and previously dependent laborers, who will be thrown upon society by the reorganization of the Union.” – Octavius V. Catto

The Ohio Street School, a public school for black students for which Caroline Le Count was principal, was renamed the Octavius V. Catto Secondary School (O.V. Catto School) in 1878 by the Republican Party in an effort to gain more black votes. The O.V. Catto School was located on the south side of Lombard Street between 20th and 21st Streets. Although today the population of this area is now a gentrified and largely white neighborhood, during Catto’s time this was on the outer fringe of the black community in the 7th Ward.  It was an economically mixed neighborhood that included busy storefronts, some owned by African Americans. This school served the population of this area until it was sold in 1913. The site, where O.V Catto School once stood, became a lumber yard and is now the Lombard Street Swim Club. As principal of the Catto School, Caroline Le Count was an ardent champion of black teachers for black students, like Catto was during his lifetime.  LeCount came from one of black Philadelphia solidly middle-class families that was active in abolition and early civil rights. She had been Catto’s fiancée and attended St. Thomas African Episcopal Church with him, and was surrounded by a community of activist.  She was a vocal civil rights advocate and was on the front-lines with Catto in the effort to desegregate the trolleys.  LeCount graduated at the top of her class at the Institute for Colored Youth and was a gifted orator, known for her elocutionary prowess.  In 1880 the Catto School’s enrollment had grown to 200 students and three educators, including LeCount herself. That same year, a school board official suggested that African American children were lagging behind and blamed inferior black teachers, LeCount led the defense. She responded in a public letter that pointed out that black teachers were exceptionally qualified because they had performed better on the certification exam than white. teachers. The Catto School was an important symbol of agency in the African American community.