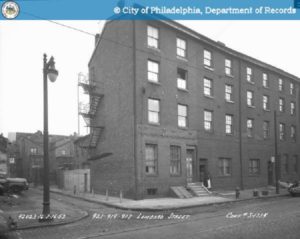 The Freedmen’s Bank was incorporated in 1866 by the federal government. Its primary purpose was to aid the newly emancipated blacks in their journey from living as enslaved people to freedmen. Northern abolitionists advocated for the creation of a bank that would help instill habits of financial responsibility. Their vision and motives were not unlike those of individuals who created early savings institutions in Philadelphia like the Philadelphia Savings Fund Society in 1815 that were specifically directed to immigrants and the poor and working class in Philadelphia. At its peak, the Freedmen’s Bank operated 37 branches in seventeen states and the District of Columbia. This made the bank one of the first multi-state banks in the nation. By 1870, nearly all the local branches were run by African Americans. The bank was also supported by deposits from Northern free blacks of all economic classes. Frederick Douglass and Robert Purvis put thousands of dollars into the bank. In Philadelphia, the branch was located in the 7th Ward at this location. It was one of the most successful of the Freedmen’s Bank operations in the country.  This bank was managed by William Whipper, an African American abolitionist and highly successful businessman, who worked in partnership with fellow black entrepreneur, Stephen Smith. O.V. Catto was the sixth person in Philadelphia to open an account.  Other depositors included an array of church, social and civic organizations.  It is here that Catto stopped to withdraw money before his assassination.