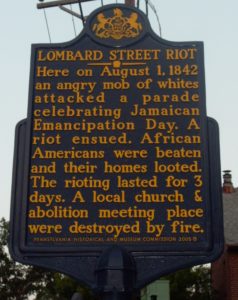 Philadelphia’s Fifth Ward, south of Chestnut Street near the Delaware River, was infamous in the nineteenth
century for racial and political conflicts. The ward’s southernmost border along South Street and nearby was the scene of race riots during the 1830’s and 1840’s targeted African Americans. This section of the City, the area from Chestnut Street to South Street between the Delaware River and 7th Street, was among the oldest in Philadelphia and had long been the home of various immigrant groups and African Americans. With the assassination of Octavius V. Catto and other incidences, the area became known as the “Bloody Fifth” and a battleground for political violence, where politicians exploited the ward’s largely poor residents and pitted them against each other in order to maintain political advantage. This situation continued through the 20th Century, but was particularly volatile, when the franchise was extended to blacks with the ratification of the 15th Amendment.

Not unlike the turmoil that took place in the South during Reconstruction, northern places like Philadelphia were not without their own conflicts over franchise and black citizenship. In Philadelphia in particular, the extension of the franchise to African American took on great meaning to the black community and its leaders. In 1838 the franchise had been taken away from black men, although some qualified under previous legal provisions as taxpayers. With Pennsylvania’s extension of the general (universal) franchise, black men were excluded, including those who had previously voted. The extension of the franchise in 1870 was met with celebration and enthusiasm by Philadelphia blacks. It was viewed as culminating from the successful national and statewide agitation and advocacy by the Pennsylvania Equal Rights League, whose members included Catto and Jacob White. It was also another significant achievement on the footsteps of their success in desegregating streetcar and mustering one of the largest contingents of black men to serve in the United States Colored Troops. Optimism was on the rise within the black community. However fear, coupled with racial bias, was widespread among many whites, especially immigrant groups who competed with blacks for jobs and the possible “political rewards” that came with political advantage. In many respects the root cause of the violence that took place in Philadelphia, was not unlike the regressive and resistance actions that were taking place in the South and led to the organization of the Klu Klux Klan in Tennessee. Both were efforts to intimidate and discourage black voting, as well as participating broadly in the public sphere. The Enforcement Act, passed during President Grant’s tenure to provide federal protections for black rights were applied to Philadelphia, as well as southern areas, during the election of 1870. However, there were no such protections on Election Day in 1871 in Philadelphia. On that Election Day, violent conflict among the Irish gangs, African Americans, and the police spilled over in both the Fourth and Fifth Wards. During the conflict Octavius V, Catto was among the people murdered. Catto was shot on the edge of the 5th Ward, near the polling place.

By 1895 a recreational park named Starr Garden was built at the corner of 6th and Lombard. Starr Garden was part of a Progressive Era initiative to give children living in poor urban areas a place to be active in order to keep them away from wrongdoing. Today, the park covers the city block between 6th and 7th Street and includes a recreation center, basketball court, jungle gym, and a large playing field.