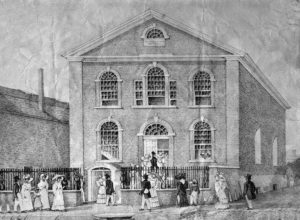 The African Episcopal Church of St. Thomas was founded in Philadelphia in 1792, in response to growing racial tensions and discrimination at St. George’s Methodist Church, by Absalom Jones, a lay Methodist preacher. In 1802, Jones was ordained by Episcopal Bishop William White, making him the first black priest in the Episcopal Church of the United States. Initially, St. Thomas services were held at the Free African Society and many of its members belonged to that group. The first church was located at 5th and Adelphi Streets (now St. James Street), between Walnut Street and Locust Street, near Independence Hall. As its membership grew, the church had many subsequent locations, and is now located in the historic Overbrook Farms community at 6361 Lancaster Avenue. Throughout its existence, the church fought for social justice causes and provided valuable social services. During the yellow fever epidemic of 1793, tended to the afflicted and cared for them. Throughout the 1790s, the church submitted multiple anti-slavery petitions to Congress and worked for abolition causes. Its membership drew from the most privileged and educated in the African American community. Members included faculty and school leaders at the Institute of Colored Youth, supporters and allies of John Brown, and members of the Pennsylvania Equal Rights League. Its ministry drew vocal advocates for early civil rights like Alexander Crummell and William Douglass. St. Thomas had an environment and community of like-minded people that Octavius Catto could relate to. He became an active member of the church some time around 1863 and served as a vestryman.