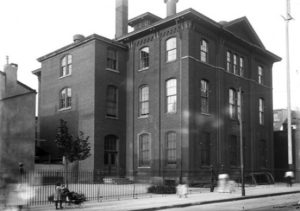 The Institute for Colored Youth was founded in 1837 by Richard Humphreys, a Quaker philanthropist. Humphreys bequeathed $10,000 to design and establish a school to educate people of African descent. For several years, the school experimented with agricultural and industrial education, as well as trade apprenticeships.  Around 1851, the managers of the school decided to focus on Humphreys’ wish to train African-American children to become teachers. In 1852, they opened the first Institute for Colored Youth building at 716- 718 Lombard Street. It is at the 7th and Lombard location that Catto received his education, graduated as valedictorian, and gave his well-known commencement speech. He also served there as a teacher from 1859 to 1866. By 1861, the Institute needed a better facility for its growing population.  Additionally, the surrounding neighborhood was also seen as becoming a bit seedy. After an extensive fundraising campaign, the school’s managers purchased a lot at 915 Bainbridge Street. The new Institute for Colored Youth building opened on March 9, 1866.  The new location included a lecture hall and a chemistry laboratory. It is at this location that Catto served as a teacher at the Institute. The original school building on Lombard Street became Liberty Hall, a community and civic meeting place, where Catto and his school friends gathered and spoke many times on civic issues of their day.  When the school moved, its original building was used as the headquarters for the Catto’s base ball team, the Pythians. The team held their meetings and planned events there. At Catto’s death, faculty and students mourned his death and the school closed for two weeks. That building is no longer standing today. The school remained at 9th and Bainbridge until it was moved in 1902 to George Cheyney’s farm, some 25 miles outside of Philadelphia in Chester County. Afterward the Institute became known as Cheyney and began granting collegiate degrees in 1913. At this site, the Pennsylvania Historical Commission has placed a historical marker.