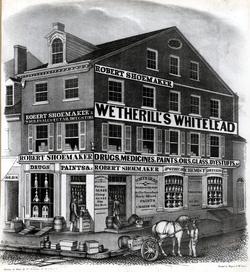 In April of 1848, William Catto packed up his family and ran for the Maryland/ Pennsylvania border. The reason: he and his family were fleeing arrest. Awaiting a ship in Maryland to take him to Liberia where he was to be a missionary, William Catto got news of the impending arrest after church officials intercepted a letter that gave them evidence that Catto may be encouraging slave rebellion ideals. Without any official papers, William was able to get his family across the border and to Philadelphia where they moved into their home on Kessler Alley in the Spring Garden Ward, located on present day North 5th Street.  Kessler Alley was a respectable, racially mixed neighborhood in the mid-1800s. The neighborhood was likely a perfect place for William Catto who had become a prominent religious, abolitionist and civil rights leader. William’s young children may have been able to make some friends, as the street had seven families and fourteen children were under the age of twelve. The neighborhood was close to many different things, including Independence Hall, the Female Abolition Society, Philadelphia’s bustling waterfront and a commercial district, and the home and studio of African American artist and civil rights advocate David Bustill Bowser. Bowser was among the many free black men that William forge alliances with.

When the 1850 federal Census was taken, OV Catto and his family lived at this location. This neighborhood was outside of the 7th Ward, where the majority of African Americans lived at the time. In the household lived William T. Catto and his wife Mary, along with six Catto children: Catherine (15), William (13), Octavius (11), Frances (6), Garrison (2) and Erskine, who had not yet turned one-year old. The William Catto is identified as mulatto. Both Garrison and Erskine are listed as children who were born when the family lived in New Jersey. Given their ages, it appears that the family stayed in New Jersey for two years before moving on to Philadelphia. Other Census records show that Catto family kin had connections in New Jersey, which can explain why William Catto, Sr. first settled his family in that state after leaving Baltimore. Catto’s oldest brother, William, eventually raised his family and worked in New Jersey.

Unfortunately, the Catto family’s first Philadelphia home is no longer standing. In the early/mid-20th century a project of redevelopment swept over Philadelphia. Ambitious city planners decided that the area surrounding the building in which our Declaration of Independence was signed needed a makeover. All residential buildings that stood on what today is known as Independence Mall, were demolished making room for Independence Mall and institutions such as the Constitution Center, the United States Mint, and the Liberty Bell Pavilion. The Catto’s first family home once stood near where the United States Mint stands today.