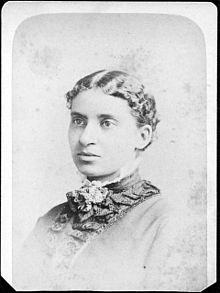 The granddaughter of wealthy sailmaker, James Forten, and the niece of Harriet Forten Purvis, Charlotte grew up in a privileged black family in Philadelphia and New England. When her mother died in 1840, she was raised by various members of her extended family and in 1854 moved with one of her aunts to live in Salem, Massachusetts. It is there she attended a private school, where she was the only non-white student. In Salem, she became a member of the Salem Female Anti-Slavery Society and became the first non-white person to teach white students in the public school. During the Civil War, Forten was the first black teacher to work with the mission establishing schools on the South Carolina Sea Islands and began teaching freedmen. Her essays of her experiences were published in Atlantic Magazine. A historical marker is at her last residence at 1608 R Street, NW, Washington, D.C, where she lived with her husband, Presbyterian minister Francis Grimke, who led Washington’s 15th Street Presbyterian Church. Rev. Grimke was active in the Niagara Movement and was a founder of the NAACP. Their home in Washington, D.C. was designated a National Historic Landmark in 1976.