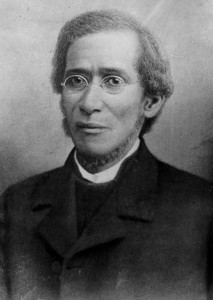 Born free in South Carolina, Daniel came North at an early age and was initially a school teacher in Philadelphia before he left his connection with the Methodist church and joined the African Methodist Episcopal church. In 1852, he was elected AME bishop and his tenure was called the most significant since that of Richard Allen’s, the church founder. It was Payne who purchased Wilberforce College in 1863 from white Methodists and made it the first black college in the US. Payne served as its president. Daniel is recognized for his work that not only improved the education of AME ministry, but also expanded the church membership, which by the end of Reconstruction had over 250,000 new adherents.