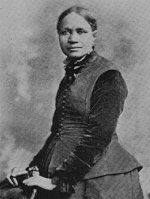 A well-known equal rights activist, public speaker and writer, Harper is now known to be the most prolific writer of the 19th Century. She was one of the most prominent women during this period. Her writings appeared often as serials in African American publication like the Christian Recorder and the Anglo-African Magazine. An ally and friend of William Still, Harper aided his Underground Railroad efforts and also worked as an educator among the freedmen during Reconstruction. In 1866, she delivered a powerful speech at the National Women’s Rights Convention, along with Lucretia Mott. A historical marker is at her residence at 1006 Bainbridge Street, Philadelphia.