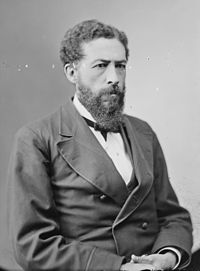 Mercer is the first African American to be elected to public office in the United States. In 1854, he became the first African American lawyer in Ohio. Mercer was an abolitionist, educator and politician/diplomat. He and Catto worked together in the National Equal Rights League (NERL), a national network of activists working to extend black rights and suffrage in Northern states after the Civil War. Mercer led the NERL in 1864. Catto served as secretary of the Pennsylvania chapter, which extended his network of associated across the country. Mercer became head of Howard Law School. At Catto’s death, he gave a moving speech to the faculty at Howard Law, encouraging them to continue to work on the causes Catto cared about. His great-nephew is the renown poet, Langston Hughes. A historical marker honoring John Langston is on the courthouse grounds in Louisa, Virginia.