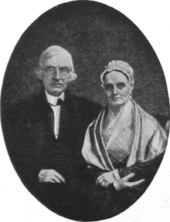 Lucretia (1793- 1880) and James (1788 – 1868) Mott were a power couple. By the time of the Civil War, Lucretia and James Mott were elder statespersons in the abolition movement. Lucretia also became a leading voice for women’s suffrage, and she and James attended the first Women’s Rights Convention at Seneca Falls. Both were supporters of John Brown and cared for Mary Brown in their home in Philadelphia after John Brown was hanged at Harper’s Ferry. The training camp for black troops, Camp William Penn, was built on land owned by Union League member Edward M. Davis, the son-in-law of abolitionist Lucretia Mott. The land was adjacent to the Mott’s “roadside” estate. As the black regiments drilled, they sometimes marched and saluted Lucretia Mott as she watched from her porch. A historical marker honoring Lucretia stands on PA611 at Latham Parkway, North of Cheltenham Ave, Elkins Park.