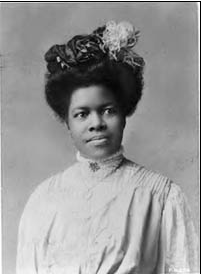 The granddaughter of Cyrus Bustill, a founder of the Free African Society in 1787 in Philadelphia, Sarah Mapps was an educator, writer, public lecturer, amateur artist, and abolitionist. As an artist, she often put painted images on her signed letters. Many examples of these survive today and are the earliest surviving examples of signed painting by an African American woman. At one time Sarah considered becoming a medical doctor and was the first African American women to attend the Women’s Medical College in Philadelphia. After a year, she changed directions and became a teacher at the Institute for Colored Youth, where she was a colleague of Octavius Catto. Sarah believed that the cultivation of intellectual powers was the greatest human pursuit, along with fighting for equal rights. She was a founding member Philadelphia Female Anti-Slavery Society, along with her mother Grace. In 1855 she married William Douglass, the second rector of St Thomas African Episcopal Church and a widower with nine children. More of an intellectual than an activist, William Douglass led a congregation, whose members included not only the wealthiest black Philadelphia families, but also some of the most dominant figures in African American political life. Among these was O. V. Catto, who was a vestryman at the church, and Thomas Dorsey, an ally of John Brown.