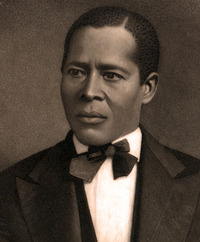 Most well-known as a conductor on the Underground Railroad and author of his account of the Underground Railroad, “The Underground Railroad Records”. Still was also a businessman, philanthropist, and life-long civil rights activist. His book, “A Brief Narrative of the Struggle for the Rights of Colored People of Philadelphia in the City Railway Cars”, describes efforts to desegregate Philadelphia streetcars. As the head of the Knights of Pythian lodge, Still provided support for Catto’s baseball team. His daughter, Caroline Still (1848-1919) was an early graduate of Women’s Medical College and became a pioneering medical doctor, working at Tuskegee Institute. A historical marker is at his residence at 244 South 12th Street, Philadelphia