Men of Color of Philadelphia!  Come Forward! A door-sized poster shouted these words to passing African American men to encourage their enlistment in the United States Colored Troops (USCT) during 1863 when the Civil War had been in progress for two years. Thousands of black men responded and enlisted. These men believed that army service would enable them to exercise their manhood in the service of the nation’s survival, with the promise of opportunity and the full exercise of freedom. Among the organizers and sponsors of the recruitment drive, listed at the bottom of the poster, are several conspicuous names including Frederick Douglass and O.V. Catto. Octavius Catto worked tirelessly to raise recruits for training at the first and largest federal training camp for USCT, Camp William Penn north of Philadelphia. 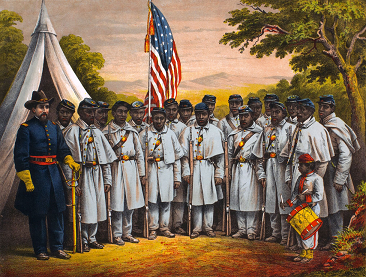 Volunteers had to pass a physical examination before they became army recruits and underwent weeks of training. To participate in the fight to preserve the United States, soldiers must be healthy. Most doctors had never tried to heal black male bodies before the war. Army doctors, however, and the entire army leadership consisted of white men with little understanding of the black male body. The USCT was both a military experiment and a social movement. Both army and civilian observers wondered, would the black man fight?  Would he panic and run?  Can he endure the exhaustion of marching for days?  Does he have the intelligence to learn how to load and fire weapons?  The army was eager to answer these questions.

The health of the USCT individual soldier was determined by his own health history.  Did the soldier come from slavery or poverty? If so, the recruit might be undernourished and have a poor idea about how to achieve and maintain good health. The soldier’s upbringing was important, particularly his environment.  Soldiers from rural areas came to recruitment camps and shared tents with soldiers from all walks of life. Soldiers from rural backgrounds had little exposure to the endemic diseases of cities and shared tents with soldiers from urban areas who had become immune to such diseases. The result was much illness and inability to function as a soldier.

During the 1860s, at a time when the genetic basis for human health was not yet known, a soldier’s overall physiology was evaluated in terms of physical endurance, courage, moral qualities, cultural and family background, and apparent intelligence. Army doctors could predict future performance of white soldiers based on knowledge of these characteristics, but black soldiers were a comparatively unknown population. Doctors also realized that those recruits who were escaped slaves endured abuses and privation not experienced by most white recruits. Black soldiers also had little experience communicating their health concerns to white doctors and may have maintained ideas about health and nutrition of African origin very foreign to army practices.

Army doctors themselves were always in short supply: usually three were assigned to a regiment of 1000 soldiers. Doctors, of course, came into the army with the opinions and prejudices common to most white people at the time. With little understanding of the black male body, doctors believed that black soldiers had an inborn tolerance to tropical diseases.  They recommended sending USCT into southern areas where yellow fever and malaria infected white troops as a result.  They and the army command believed, too, that black soldiers had a much higher tolerance for manual labor, so USCT were too often detailed for fatigue duty, the term for such labor. One doctor, J.W. Compton, MD, stated that the black man “differs as widely from the white man physiologically and psychologically, as does his skin or hair; hence the importance of understanding his peculiarities.”

The army monitored and kept statistics about the health of black and white soldiers. In fact, these statistics, later published in the U.S. Government’s Medical and Surgical History of the War of the Rebellion, constituted the first public health record of African Americans. The army found that, overall, about 2.7 white soldiers died of disease for every one who died in battle, compared with 10 black soldiers for each one who died in battle. It is impossible to assign a definite explanation for this discrepancy.  Interestingly, the fatality rate (the percentage) of soldiers who died of wounds was equal for black and white soldiers, 14.3%. The fatality rate for those who died from illness was 2.9% for white soldiers, 5.0% for black.  Battlefield wounds were taken care of in field hospitals where black and white soldiers received roughly equal treatment. The disparity in disease mortality may owe to a combination of circumstances ranging from second-class health care in a regimental hospital to lack of immunity to common diseases in camps, to indifferent doctors. Losses due to disease and wounds could almost destroy regiments. The 5th Regiment Infantry USCT lost 829 men, 128 due to wounds.

By war’s end, not only had USCT performed admirably in all theaters of combat, but about a dozen African American military doctors had appeared in army ranks.  Born in the United States but educated in Canada, Anderson Ruffin Abbott, MD served in a Washington, D.C. hospital for newly-freed refugees from the south and was a friend of President Lincoln and his family. Alexander Augusta, MD, also born in the United States and the first African American to receive a medical degree in Canada, also worked among formerly enslaved people in Washington and USCT and rose to the rank of lieutenant colonel, the highest achieved by an African American in the Union army.

Military authorities continued to evaluate the performance and health of black soldiers after the Civil War. The same Civil War statistics continued to inform military medicine until World War II. Shortly after the Civil War, two studies appeared, one headed by J. H. Baxter and the other by Benjamin A. Gould. The former study found no significant difference in performance by black and white soldiers, but the Gould study argued a distinct racial difference with black soldiers less able to perform their function due to racial characteristics. Through World War II, therefore, the military continued to segregate black and white regiments, a practice ending in integration by the Korean War.

Despite prejudice and conflicting interpretations of medical data, from the Civil War to the advent of an integrated military, policymakers and the public began to share a common view best expressed in a New York Times editorial of March 26, 1866:

It is evident …that … the negroes are capable of being transformed into soldiers; that they can fight, and do efficient work in all arms of service  . . . We have tried the experiment of African soldiers  . . . upon a scale of magnitude never before attempted . . . in the history of the world.