The Triumph and Tragedy of Octavius V. Catto

This article was written in 2005 to help teachers and students discover archives to use in NHD projects to find little told stories.  A lot has changed since then! Councilman Kenney is now the elected Mayor of Philadelphia and he unveiled the long-awaited Catto memorial on September 26, 2017. During the 2017-18 school year, the Catto Memorial Fund in collaboration with the Philadelphia School District’s Office of Curriculum, Instruction and Assessment provided a professional development series for Social Studies, Language Arts, and English as a Second Language Educators using the Catto story to explore America’s Civic Rights History. This initiative reached over 11,000 students and culminated in a ‘Students Speak Up’ with the Mayor, along with a paint day for the Catto mural, at City Hall at the end of the school year.  In October 2018, Mural Arts’ Catto Mural, created by artists Willis Nomo Humphrey and Keir Johnson, was unveiled at Universal Charter School at Broad and Catherine. The School District now plans to hold an annual ‘Students Speak Up’ event to showcase student project work that enables them to bring their voices forward on issues of their concerns.  This honors Octavius Catto, who at the age of sixteen began to speak up about issues of his day in the public square, including at Independence National Park, a focal point for 19th Century citizen protest and memorialization of the meaning of the American democracy. 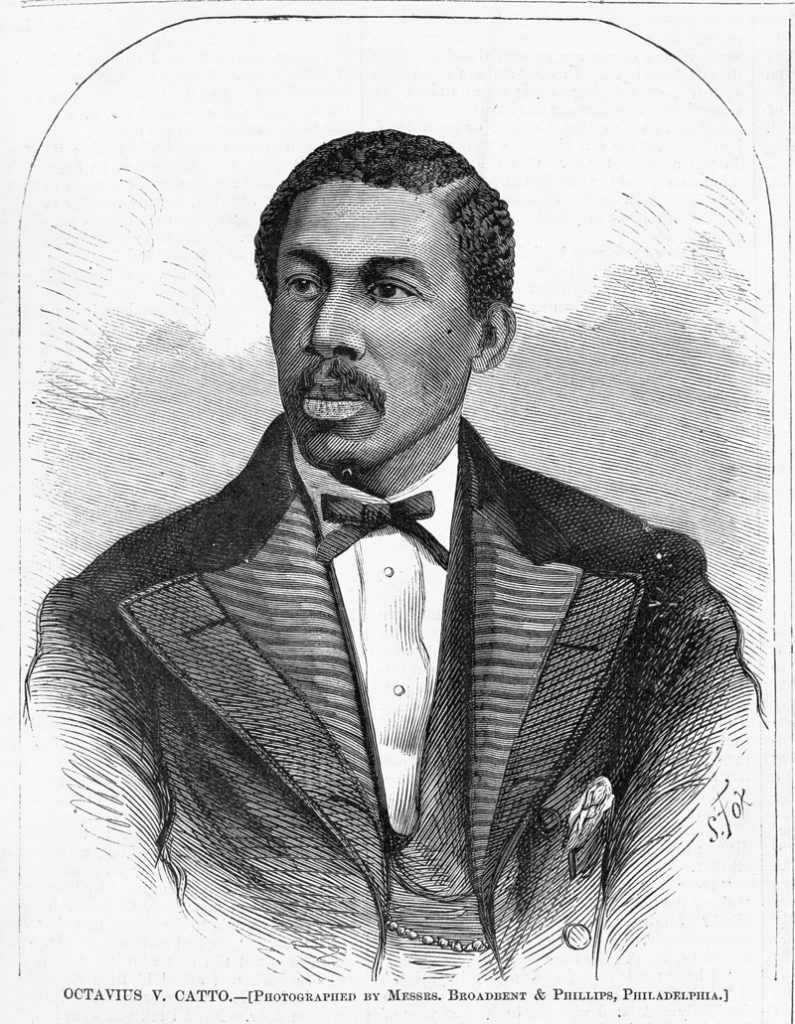 In the 19th century Philadelphia was home to America’s largest free-black, pre-Civil War community and as such played a major role in the fight against slavery and for African American rights of citizenship and opportunity.

Black Philadelphians thoughtfully and purposely created a community that reflected an African American worldview. Richard Allen and Absalom Jones each founded America’s first black churches in 1794, the African Episcopal Church of St. Thomas and Mother Bethel, as a means to overcome the racism faced by blacks in white churches.

Philadelphia blacks joined together to petition Congress to abolish the Fugitive Slave Act of 1793, which permitted masters to pursue runaways across state lines.

During the city’s Yellow Fever epidemic, the black community organized to nurse and care for the afflicted, believing (falsely) that blacks were immune to the disease.

During the War of 1812 the community recruited 2,500 black men to defend Philadelphia against a possible attack from the British. The community saw these actions as ways of demonstrating that African Americans deserved all the privileges and rights of citizenship.

Philadelphia’s early black community, which began to solidify in a neighborhood along Lombard Street near the Pennsylvania State House (known today as Independence Hall), was integral in the Abolitionist movement and Underground Railroad.

The community also produced successive generations of leaders, male and female, who grew to local and national prominence in the years before the Civil War and following. Octavius V. Catto is one of these leaders…one who made a mark both locally and nationally.

A learned man, Catto’s insistence on equality for all men has been categorized as “fanatical”. He was linked to virtually every important black movement and the inner circle of Radical Republicans of his time. In the late 1860’s he became a national spokesperson for enfranchisement and civil rights for African Americans.

What is Catto’s story?

Octavius V. Catto was born in Charleston, S.C. on February 22, 1839. His mother, Sarah Isabella Cain, was a descendant of one of Charleston’s most distinguished mulatto families, the DeReefs. His father, William Catto, was an articulate and prominent Presbyterian minister who later became a leader in the black church and worked across its various denominations.

William Catto brought his family north when Octavius was about five and finally settled in Philadelphia by 1850. In Philadelphia, Catto was afforded an excellent education; his last school being the Institute for Colored Youth, which later became the historic black college, Cheney University.

Catto graduated from the Institute in 1858 as valedictorian and, not satisfied with his level of skill, trained further in classical languages under a distinguished black scholar in Washington, D.C. Upon returning to Philadelphia, he was appointed to the Institute’s teaching staff as assistant to the principal, Professor Ebenezer Don Carlos Bassett, a highly regarded black scholar educated at Yale University and later ambassador to Haiti.

In many respects, Catto was a renaissance man… capable in many arenas, as well as a natural leader. However, as an African American, he continually hit the wall of racism. He strove to break that barrier:

All that he (the colored man) asks is, that there shall be no unmanly quibbles about intrusting to him any position of honor or profit for which his attainments may fit him. And that which is committed to him as a man, he will perform as no other than a man could perform.

His many intellectual pursuits included founding the Banneker Literary Institute and being inducted into The Franklin Institute, a scientific organization, which attracted inventors and scientist from around the world. His membership in this latter organization was met with rebuff by some. Catto also was an accomplished baseball shortstop and player-coach and was founder and captain of Pythian Baseball Club.

Catto attempted to break down racial barriers in baseball, when a group of whites formed the Pennsylvania Convention of Baseball Clubs in 1868. His aggressive nature and strivings for equality in this instance greatly offended many immigrant whites who enjoyed baseball as their pastime.

His boldest and greatest accomplishments, however, were in the political arena, as a staunch supporter of the Union cause and the Lincoln Administration. Catto worked in the inner circles of the Republican Party to gain civil liberties for blacks and in support of the war effort.

When the Confederates invaded Pennsylvania in 1863, culminating in the Battle of Gettysburg, Catto responded to the Call for Emergency Troops by raising one of the first volunteer companies. The company was officered by whites and comprised of black men. Catto continued to seek ways of raising black troops to fight for black emancipation. He joined with other leading blacks of his time, including Frederick Douglass, to raise troops under the U.S. War Department authority granted by the Emancipation Proclamation.

Catto also led efforts to gain equal access to public transportation using passive resistance and political influence. His war experience solidified his ardor for the Republican Party, which he saw as the only hope for black Americans to obtain equal rights. Catto joined the Pennsylvania Equal Rights League, begun by Republicans to help blacks gain the right to vote. In 1864, he and other black leaders from all over the country met at the National Convention of Colored Men in Syracuse, New York and established the National Equal Rights League (NERL) with Frederick Douglas as president. The NERL focused on removing racial barriers in Union states.

With the passage of the 15th Amendment, Catto’s life took another turn. Catto pledged that black men would vote republican and worked tirelessly to get Pennsylvania to ratify the 15th Amendment. This was accomplished in October 1870.

The elections that followed became alarming to most whites, as it became apparent that blacks, enfranchised by the Amendment, would vote in large numbers. In Catto’s own political ward, it was likely that blacks could change the balance between Democrats and Republicans in local offices.

On Election Day, October 10, 1871, violence and murder had started early and continued throughout the day, as gangs of white thugs roamed the black community, seeking to discourage residents from voting. Local police, many of whom were Irish immigrants and supporters of the Democrats, fueled the situation by not providing protection for black residents.

As he nearly reached his doorsteps, Catto was confronted by Frank Kelly, a Democratic Party operative and associate of the Party’s boss, who recognized Catto as he walked down the street. Kelly fired several shots at Catto with one bullet piercing his heart.

Catto was pronounced dead at a local police station, where his body had been carried. Catto’s murder produced both a public outcry and revealed the paradox of justice in a community still steeped with racism.

A backlash against the violence turned out a large majority for the Republican ticket. However, Frank Kelly was never convicted of Octavius Catto’s murder.

Kelly escaped Philadelphia after the shooting, most likely with the help of Democratic friends. He was found six years later in Chicago and extradited to Philadelphia for trial.

At the trial on April 23, 1877, six prosecution eyewitnesses, three whites and three blacks, identified Kelly as the shooter. Several of these witnesses had known Kelly prior to the shooting, so for them the identification was without question.

A key defense witness for Kelly was an ex-police sergeant, John Duffy, who himself had been tried for the murder of Levi Bolden, another casualty of the 1871 election riot. A jury of twelve mostly working-class men, none African American, acquitted Kelly after the close of the 10-day trial.

For some time, Catto was memorialized after his tragic death. Public schools honoring him were opened first in Philadelphia in 1879 and then in Camden, New Jersey in 1929.

For years, Catto’s 5th Brigade continued to pay tribute to him in ceremonies at the unit’s quarters as well as at his gravesite. In the early twentieth century as a part of the black Elk (Improved Benevolent Protective Order of Elks of the World (IBPOEW)) movement, a group of Philadelphia men formed the O.V. Catto Lodge in 1906.

This same year, white Elk leaders finally began efforts to improve relations with the black lodges and end the six-year long, sometimes violent, inter-fraternal conflict between the groups. The formation of the Philadelphia lodge does not appear to have been greeted with the same consternation and enmity black lodges endured earlier.

Did the selection of Catto for the lodge’s name, support this healing? Today, there are many efforts in Philadelphia seeking to honor Catto and reclaim his legacy. Among them is a citizen committee formed by City Councilman James F. Kenney to erect a prominent public sculpture and create education programs for local schools.