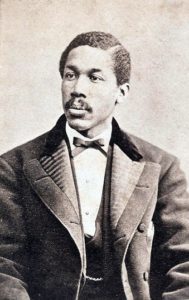 There is only one known photo of Octavius V. Catto: a portrait taken in in the Philadelphia studio of photographer Gallo Cheston that Catto intended to use as a carte de visite*. This 1870 or 1871 photograph was the basis of the engraving used in Catto’s obituary in Harper’s Weekly. The photo of Catto and its nearly identical engraving are by far the most widely used images of Catto-from websites, to book jackets, to Catto’s tombstone in Eden Cemetery.

I was thus struck by a colorized version of this photograph shared with me by Anthony Waskie, an expert in Catto’s military career. It is an enlargement of that same Cheston photograph used as a hand-colored salted paper print, a common technique of the late 1800s. Replacing the wide-lapelled jacket and ribbon tie in the original, it shows Catto in his uniform as a major in the U.S. Army assigned to the Pennsylvania National Guard. Experts speculate that it was likely intended for use on a broadside (large poster) for the Republican Party. The University of Delaware was given this rare image in 2005 by Mary Christine Havner who had found it in an old barn. 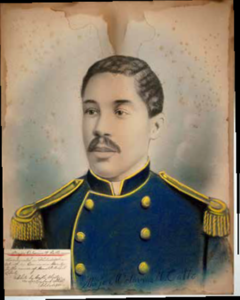 The colorization lends this image a vibrancy that I thought would work well aesthetically for a biography geared toward students. Because I was only able to access a small version of the image, the graphic designer for the project came up with the idea of using pixilation as a visual theme throughout the publication. A careful analysis of the original photograph and the colorized version, however, reveals that Catto’s skin is lightened, his eyebrows are reduced, his hair looks smoother, and both his nose and lips appear smaller and thus, more Caucasian.

The intent behind making these small but significant changes is something that we cannot know for certain. We can, though, have our students speculate on the reasons for these adjustments. Who might have made the choices about how to alter the images? What may have been the purpose of making these changes? We can also connect the differences between the two images to the manipulation of images that has become ever more prevalent in the twenty-first century.