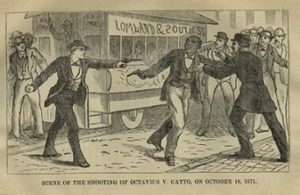 By 1871, Philadelphia community leader Octavius Catto had become the Head of the Boys’ Department at the Institute for Colored Youth. This was following the departure of the fabulously named principal, Ebenezer Don Carlos Basset, who had been appointed ambassador to Haiti by President Ulysses Grant in a bid to shore up black support for the Republican Party.

Catto had also become a major in the Fifth Brigade, an all-black division of the National Guard. As such, he led a march to Fairmount Park for the dedication of a memorial to President Lincoln, a statue that still sits on Kelly Drive across from Boat House Row.

Before Election Day in October it was clear that intimidating black voters would again be the tactic employed to minimize Republican turnout. A week before this mayoral election, armed men broke into an office where voter roles were being reviewed. The night before Election Day, two black men were ambushed and shot, one of them fatally.

As always, a teacher first, Catto began October 10th at the ICY. While he was engaged in his work, reports began to trickle in of Moya men, police officers, and others intimidating black voters at both the Tenth and Bainbridge and the Sixth and Lombard polling places. Soon rioting flared up and down Lombard Street and spread as far south as Fitzwater.

Fearing for the safety of the students, the ICY closed after lunch. Catto received word to arm himself and later report to Fifth Brigade headquarters at Broad and Race Streets. After stopping at his bank on Ninth and Lombard Streets to withdraw $20, Catto was assaulted by a man wielding a gun but managed to get away. His next stop was a pawnshop near Third and Walnut Streets where he purchased a gun. 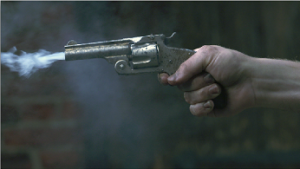 Nearing his home at 814 South Street, at approximately 3:30 p.m., a streetcar filled with black and white passengers was passing by. Suddenly, a man with a bandaged head shot Catto twice at close range. He fell into the arms of a policeman who had arrived at the scene. At the age of 32, Octavius Catto was dead.

Though clearly the most prominent victim of Election Day violence, Catto was one of ten black men shot that day. In spite of the rioting and the shootings, William Stokely, the Republican candidate, had won the race for mayor.

Thousands of mourners, both black and white, came to pay their respects at Fifth Brigade headquarters where Catto’s body was laid out prior to burial. Catto’s funeral, the largest ever for a black man in Philadelphia, was attended by members of Congress and city officials, as well as scores of former students, colleagues, friends, and ordinary people. A procession of more than 125 carriages followed a three-mile route to Lebanon Cemetery in South Philadelphia. Henry Highland Garnet, a nationally known minister and activist, gave the eulogy.

Caroline Le Count wailed as she was overcome with grief at the funeral. She never married but lived a long life and served for decades as the principal of the Catto School at Twentieth and Lombard Streets. Named for her deceased fiancé, the school reflected Catto’s strong belief that black students should have black teachers. Octavius’s father, William Catto, outlived his son by only seven weeks. The father was buried next to the son.

Frank Kelly, a member of the Moyamensing Hose Company and a friend of William McMullen’s, was widely known to be Catto’s assassin. In the immediate aftermath of the shooting, he was able, probably with the help of sympathetic police officers, to escape. Six years later, in early 1877, he was found living in Chicago under an assumed name. A murder trial was held in April of that year in the Court of Common Pleas at Sixth and Chestnut Streets. Though the prosecution presented many eyewitnesses who identified Kelly as the shooter, the all-white jury turned in a verdict of “not guilty.”

Now that you have learned about Catto’s remarkable life of scholarship, athleticism, activism and leadership, you may be wondering why many people in our city have never heard of Octavius Valentine Catto, one of the most famous people in mid-nineteenth century Philadelphia.

It wasn’t for lack of trying on the part of his admirers. Jacob White, Catto’s best friend and fellow educator, tried for many years to raise money for a memorial to Octavius, but he was unable to gather sufficient funds. Both Booker T. Washington and W.E.B. Du Bois wrote about Catto. A Black Elks chapter called the Octavius V. Catto Lodge was founded in 1903 and continues to this day. In 1991, a blue and yellow historical marker was erected in front of Catto’s South Street home, the site of his assassination. Like others interred in Lebanon Cemetery, Catto’s grave was long ago moved to Eden Cemetery in Collingdale, Delaware County where a Catto memorial, labeling him the “Forgotten Hero” was erected in 2007.

So why was this hero forgotten? The answer is both highly complex and incredibly simple. He was a black man who was educated, dignified, articulate, and actively engaged in promoting civil rights. For many years, the stories of black heroes were forgotten because they were not taught in schools. People writing textbooks and choosing curricula did not want the story of a strong, intelligent black leader to be shared with white students (who might challenge assumptions about white superiority) or black students (who might follow Catto’s courageous example).

Fortunately, we now live in a more inclusive era. Black history is now offered at most colleges, and in 2005, Philadelphia became the first city in the nation to require a year of African American history for all high school students. Much that was long covered up is now coming back to light.

In 2003, Jim Kenney had spent his whole life in Philadelphia and was serving as a City Councilperson representing the area that Catto called home. It was at this time that he first heard Catto’s story. He was fascinated. And also angry. Why had he never learned about this remarkable Philadelphian? Soon Kenney, who was elected mayor in 2015, began advocating for a memorial to Catto in a prominent Philadelphia location. Although it has taken a great deal of time, money, and effort, Octavius Catto is finally getting the recognition he deserves from the city in which he lived.

When someone asks you why there is a new statue on the south side of City Hall, you can tell them what you know about no-longer-forgotten hero, Octavius Valentine Catto.