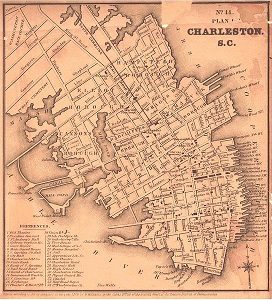 Octavius V. Catto was born on February 22, 1839 in Charleston, South Carolina. Although Octavius was once a name given to an eighth child (can you figure out why?), Octavius V. Catto was only the third child born to William T. Catto and Sarah Isabella Cain. (Think about the date he was born — can you figure out what the V. stood for?) Neither of Octavius’s parents were ever enslaved. His mother was born free into a prominent mixed-race family. His father’s mother had been born into slavery but gained her freedom as an adult. William Catto was born in 1810, after his mother gained her freedom, thus he was born and remained a free man. (Oh, and if you figured out that “oct” is a prefix meaning “eight” and guessed “Valentine” as the middle name you’re correct.)

Charleston was the center of the North American slave trade. It is estimated that forty percent of enslaved people came through the port of Charleston, and South Carolina had by far the highest proportion of enslaved residents of any of the thirteen original colonies. In the regions of the state where rice and indigo were grown, enslaved people outnumbered whites by a ratio of nine to one.

Even though the Catto family was free, young Octavius must have seen people in bondage all around. Indeed, about half the population of Charleston was enslaved — some working as domestic servants, others as laborers in workshops or as stevedores carting items on and off ships in the busy Charleston Harbor.

Enslaved people could be “hired out” (essentially rented) by their owner. Fees paid for services rendered were usually divided between the enslaved person who did the work and the owner who could profit from it. This practice was especially common for enslaved people who possessed skills such as carpentry or furniture-making, enabling some to later purchase their freedom.

William Catto, a member of Charleston’s significant (and carefully watched) community of Free People of Color was trained as a millwright, a person who built and maintained rice mills, the machines that, along with the grueling efforts of enslaved field hands, made South Carolina’s plantations prosperous.

His passion, however, was more spiritual than practical. William served as a sort of deputy minister leading the black members of a Presbyterian church, instructing them in religion as they sat in the crowded balcony to which they were restricted. He was also the church’s representative at funerals of black congregants.

Sadly, one of the funerals at which he served was that of his wife, Sarah. She passed away shortly after giving birth to a fourth child, a fate that was not unusual in the 1840s. Octavius was only six at the time of her death.

His father soon remarried (also not unusual at the time) and several more Catto children were to follow. Octavius, though, was to remain what he had clearly already become due to his obvious intelligence and boundless curiosity: William Catto’s favorite child.

Frustrated with the limited role he was able to play in the Charleston church and longing to lead his own flock and preach his own sermons, William Catto took a groundbreaking step for a black man; he sought ordination to serve as a missionary. At that time in Charleston, black people were not permitted to learn how to read and write, yet William Catto was able to pass a daylong oral theology exam administered by an all-white group of church officials. His dream of becoming a religious leader seemed to be on track.

Just before Octavius turned nine, the Catto family left Charleston and headed north to Baltimore, Maryland — still a slave state, but one in which the percentage of enslaved people was much smaller. There, the family was to prepare for a journey to what would be their new, permanent home — the African nation of Liberia.