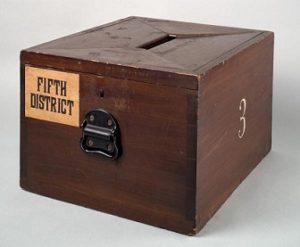 This ballot box was used in the northeastern U.S. circa 1870 and is now on display at the Smithsonian.

Octavius Catto was a leader of Philadelphia’s African American community who had fought for the right for to serve in the Union Army, access to Philadelphia streetcars, and admission to the National Association of Base Ball: None of these battles was as important to him as his final campaign: the struggle for voting rights. Catto and his associates knew the power of the ballot box could potentially make all other rights fall into place.

Fortunately, there was a period after the close of the Civil War known as Radical Reconstruction. During this era, the United States Congress was led by men like Thaddeus Stevens, a House member from Pennsylvania, and others who believed that black men should be able to vote. In the South, men newly emancipated from slavery were already voting and even holding elective office.

In the North, however, many states still limited the franchise to white men. (Though some relatively wealthy and educated free black men in Pennsylvania had been able to vote in the late 18th and early 19th centuries, they were explicitly forbidden from voting by the state’s 1838 constitution.) With pressure from groups like the Equal Rights League, yet another organization in which Catto played a leading role, the Fifteenth Amendment extending voting rights to black men was passed by Congress in 1869 and ratified by the states in 1870.

Sadly, though, the right to vote and the ability to safely cast a ballot were not the same thing. Certainly not in Philadelphia.

The neighborhood of Moyamensing in South Philadelphia, populated largely by Irish immigrants, lay adjacent to the stretches of Lombard, South, and Bainbridge Streets where the city’s black population was concentrated. Moyamensing was dominated by the Moyamensing Hose Company, a volunteer fire company that, like similar organizations in other parts of Philadelphia, functioned as part street gang, part neighborhood protectors, part political club; it also occasionally fought fires.

The undisputed leader of both the fire company and the neighborhood was William McMullen, known to all as “the Squire.” McMullen and his followers were solid Democrats; they knew that their influence, power, and economic well-being would be severely diminished should the Republicans, “the party of Lincoln” to which blacks were overwhelmingly loyal, be elected to office in Philadelphia. Patronage, a system in which the winner of an election gives out jobs to supporters, was firmly in place in the city. A Republican mayor would likely replace many Irish workers on the City Hall payroll, maybe even with black people. 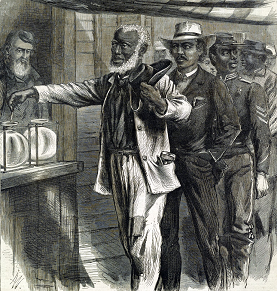 Once the Fifteenth Amendment was passed and black male suffrage was the law of the land, Squire McMullen and the Moyas employed what they saw as their surest strategy to maintain Democratic control: intimidation of black voters. The first time newly enfranchised blacks participated in an election in Philadelphia was 1870, and voter intimidation was rampant. The Moyas, with help from city police officers, physically assaulted black men waiting in line to vote at Sixth and Lombard Streets. After numerous victims and witnesses complained to the U.S. Marshal, Marines based at the Navy Yard were called in to restore order and protect aspiring black voters.