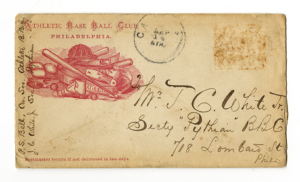 In 1860s Philadelphia, Octavius Valentine Catto was a minister’s son, a scholar, a teacher, an activist, an orator, and an emerging community leader, but he also knew how to have fun. He enjoyed summer trips to Cape May (one of the few Jersey shore communities that welcomed blacks), and he loved baseball.

Various forms of the modern day game of baseball had long been played in Philadelphia and other cities. Games like town ball, bass ball, goal ball, and base ball were popular pastimes with boys and with gentlemen who were able to afford some leisure time.

The city’s first organized team (and for that matter, the first bat and ball club in the country), the Olympic Town Ball Club, was made up of affluent merchants and businesspeople. In 1833, they established a club headquarters on Broad Street a few blocks north of Market Street. Still a thriving club decades later, they built the city’s first baseball park at 25 th and Jefferson Streets, complete with a field, a clubhouse, seating for spectators, and a fence so that they could charge admission. 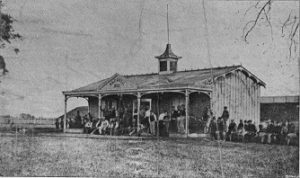 During the Civil War, men from all social strata were exposed to games played with balls and bats. Thus once the war ended, the game that evolved into baseball became a widespread phenomenon. The number of baseball teams and baseball fans skyrocketed, and Catto, a natural athlete in addition to his many other talents, was clearly paying attention.

In 1866, Octavius Catto and his ICY/Banneker/Equal Rights League buddies formed the city’s second black baseball team. You won’t be surprised to learn that Catto was quickly chosen as the team’s captain. The team name, too, had a very Catto-like quality. They were to be the Pythians, a name perhaps derived from a mythical priestess at the Greek Temple of Apollo (also known as the Delphic Oracle).

With Catto batting second and playing second base, the Pythians ended their first season with a 9-1 record, easily defeating nearly all of the black teams from Washington to New York City. These games were played in a spirit of camaraderie and were followed by evenings of meals and parties for both the visiting and hometown teams. 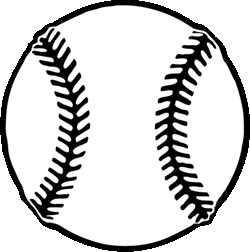 After the smashing success of the Pythians’ first season, Octavius decided that his team should apply for membership to the Pennsylvania chapter of the burgeoning National Association of Amateur Base Ball Players. Catto asked Raymond Burr, a multiracial descendant of Founding Father Aaron Burr, to represent the team at the chapter’s annual meeting in Harrisburg. Of the 266 teams that had applied for membership that year, 265 all-white teams were admitted. In spite of Burr’s efforts on behalf of the Pythians, the men at the meeting refused to even vote on the black team’s application.

Octavius Catto still had hope. The December 1867 meeting of the National Amateur Association of Base Ball Players was to be held on Chestnut Street in Philadelphia. Even though they had been rebuffed by the state chapter, the Pythians would apply for national membership. The delegates to this meeting referred to the team’s application as “Catto’s proposal.”

This time at least it came up for a vote. The vote, alas, was not to admit the black team. The official explanation: “If colored clubs were admitted there would be, in all probability, some division of feeling, whereas, by excluding them no injury could result to anyone.”

The next year, the Pythians had another stellar season: they went undefeated. Although officially rejected by the game’s governing body, the team’s athleticism and skill did attract the attention of white sports journalists, ball players, and spectators. On September 3, 1869, the Olympics, Philadelphia’s first ball club, accepted a challenge to play against the Pythians. In spite of playing on separate teams, black and white players would have the opportunity to compete. Four thousand enthusiastic fans, both black and white, filled the stands.

The game was remarkable enough to attract national press. After three hours of play, the Olympics had won by a score of 44-23. It is worth noting that the lopsided score was not solely a reflection of playing ability. Back then, there was only one umpire on the field, and it was left to the players themselves to call balls and strikes, safes and outs. The role of the umpire was only to hear appeals when one side thought the other had made a bad call.

Before the game, the Pythians made the choice not to question any calls. They were uncertain of the crowd’s reaction should they as black men publicly challenge the word of white opponents. A journalist’s account of the game cited several bad calls on the part of the Olympics that were left unchallenged. 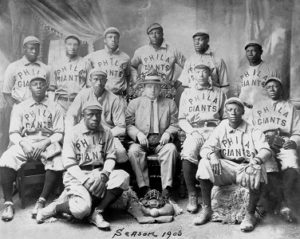 The Philadelphia Giants. an early Negro League team who followed in the footsteps of the Pythians

Soon though, another white team played the Pythians. The City Items were defeated by Catto’s team by a score of 27-17. In the years following the interracial Pythian games, competitions between white and “negro” leagues became common. During the many decades that blacks and whites tended to live, work, socialize, worship, and study separately, the ball field became one of the few places that the races mixed. Thus even in his choice of leisure activities, Octavius Catto made a difference in terms of the quest for fair treatment, equality, and the opportunity for black people to prove themselves to a racist society.