(Image: “I am a Man”, Memphis Sanitation Workers Strike, 1968. MLK was assassinated in Memphis standing with the sanitation workers in their strike over unfair labor practices and the death of two workers.

America’s Civil Rights Movement is often marked as starting with the 1954 Supreme Court decision, Brown v. Board of Education and displayed through massive resistance efforts seen by many Americans on television and through photography. This lens neglects African Americans’ long struggle for civil rights and how each generation of activists laid the foundation for what occurred in what most Americans know as the Modern Civil Rights Movement of the 1950’s and beyond. It overlooks the consistent themes, issues and symbols that have lingered around race in America dating from the early abolition movement as evidenced in abolition symbols. Among the striking concerns resonating through the long arc of history are the inhuman treatment and lack of recognition of black manhood, citizenship rights (equal protection, due process), equal opportunity as well as the degradation of black womanhood and families. 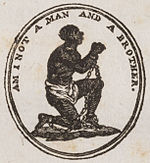 Octavius V. Catto’s activism addressed many of these concerns in the Civil War/Reconstruction period  when he helped lead the call to create United States Colored Troops, pushed for ratification of the 13th, 14th and 15th Amendments, and worked to de-segregate public transit in Philadelphia. These were the same concerns at the Memphis Sanitation Strike in 1968, which Martin Luther King spent his last hours of life supporting.

Black life and communities across the country have largely been invisible to most white Americans, even today. Their stories and issues were, with few exceptions, not covered by white media outlets, whether print or later radio. The recent NBC documentary, Hope and Fury: MLK, the Movement and the Media, dramatized how coverage of black America before the mid-20th Century was scant, if not non-existent, and even today is limited. When blacks were mentioned in white newspapers, they were often presented as nameless individuals: “a Negro man” or “a Negro woman”. This neglect is the reason African American communities formed their own media outlets, newspapers and later radio stations, responding to the call: “If not us, who will!” The formation of African American newspapers began in 1827 with a weekly four column publication printed every Friday, Freedom’s Journal, by free born African Americans John Russwurm and Samuel Cornish. It became the voice for the black generation that preceded Octavius Catto. This newspaper tradition continued with Frederick Douglass’ North Star (1847 – 1860) and the Philadelphia Tribune (today America’s oldest continuously published black newspaper, first published in 1884) and nearly 200 other papers today. (More on the black press see the 1999 award-winning PBS documentary: The Black Press: Soldiers Without Swords).

It was only with the new television medium, which engaged “live action” and “up to the minute reporting”, that MLK and others were able to strategically use it to bring attention to racism and how it impacted black life. However, today, due to persistent segregation, most African Americans and whites continue to live as the Kerner Commission reported in 1968 in “two separate societies, one black and one white, separate and unequal.” Now, social media has become the new approach that black communities are using bring forward evidence of their concerns about social injustice.

The Civil War and Reconstruction period was an important touchstone for civil rights. It is Octavius V. Catto and his generation that helped change the meaning of the U.S. Constitution through their local and national efforts to gain ratify the “Freedom Amendments” and their early protests that expanded public access, education and opportunities for black people. These opened a floodgate of activism by blacks that led to the creation of important civil rights organizations, new higher education institutions, and a small, highly educated black middle class, who became the vanguard for social change in ongoing generations.

It is important, therefore, that the Catto story is told as a story of community and alliances. American public memory of history is generally presented as a triumph of individualism, focused on the achievements of one great person, usually a man, and not recognizing the community dynamics of social change. This has particularly been the case in telling the story of African Americans. The long struggle for civil rights in the black community, dating back to the founding of the nation has been an effort to “change the nation” and it took the fortitude and courage of successive generations of both sexes to move the needle. What is most extraordinary and compelling about Catto’s story are the broad alliances within a national network of African Americans and white supporters that made his achievements possible. With the Civil War, Catto and his associates envisioned, with great optimism, the promise of the Declaration of Independence for black America. It was this optimism that the boundaries of the past that limited citizenship and opportunities for African Americans would be removed to produce new institutions and laws that laid foundations for the Modern Civil Rights Movement. This American civil rights story is the story of forging citizenship and opportunity. 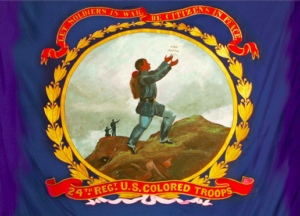 Through this portal, we will explore how O.V. Catto was an important leader in this effort with Philadelphia as a leading center. It will examine the themes, messages and agendas that marked America’s civil rights story across the decades up to the birth of Martin Luther King.

“We Will Prove Ourselves Men”, 127th United States Colored Troops Regimental Flag, September 1864 organized and trained at Camp William Penn (near Philadelphia). David Bustill Bowser, artist. Catto was among the speakers to honor the regiment in May 1865 at the Grand Review in Harrisburg.