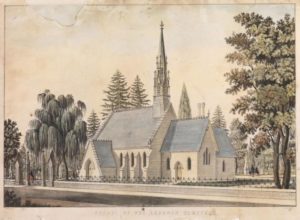 On February 14, 1849, the Commonwealth of Pennsylvania granted the incorporation of Lebanon Cemetery to a group of Philadelphian African Americans led by Jacob White, Sr.  The group included leaders and entrepreneurs in Philadelphia’s free black community, among them were members of the Bustill family including artist David Bustill Bowser, Nicholas Bolivar, James Needham, and Isaiah Wears. Forming the cemetery was both a business enterprise and a way to address a fundamental need within the black community. African Americans were deeply concerned about having proper burials for their kin.  This concern over burials is demonstrated by the many mutual benefit associations which guaranteed funeral burial expenses.  Proper burials were the single largest expenditures that most families ever made and having an entrusted resting place where the dead would not be sent to medical college dissecting rooms was important. Additionally, a black owned cemetery also kept money within the black community. Lebanon ranked equally with Olive Cemetery as the biggest single black enterprise run by black Philadelphians. It was one of two black cemeteries without affiliations to a religious denomination. The cemetery was located at this site, which at the time was at Philadelphia’s southern edge in what was the underdeveloped Moyamensing District, surrounded by scattered homes, farms, and empty plots. In 1854, however, with city consolidation, Moyamensing became part of the City of Philadelphia. By 1870, the running of the cemetery was assumed by Jacob White, Jr., Catto’s oldest and cherished friend.   After his assassination in 1871, Catto was laid to rest at Lebanon, along with Isaac Chase and Jacob Gordon, who were also killed the same day in the election violence against blacks.  Over the years, however, Lebanon Cemetery fell into disrepair and in 1882 was also a victim of an illegal channel to obtain corpses for Jefferson Medical College.  Conditions became so grave that in 1887 the Philadelphia Tribune called the cemetery “a disgrace to the Board of Managers.”  In the fall of 1899, the City Board of Health finally condemned the cemetery outright and paid $90,000 in 1903 to have the bodies reinterred to various suburban sites. The existing bodies, including that of Octavius Catto, was moved to Eden Cemetery in Collingdale/Darby (Delaware County, Pennsylvania), which was founded in 1902.