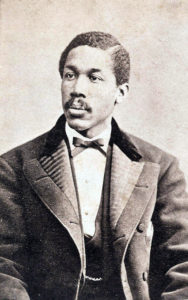 Philadelphia is a city closely associated with history. Many people, however, seem to think that Philadelphia’s historical significance begins and ends with the Declaration of Independence, the Liberty Bell, Ben Franklin, and all of the familiar “Birthplace of the Nation” stuff.

But our city’s history is so much richer than what occurred during one crucial era in our nation’s past. You are about to read the biography of a true American hero — an individual who accomplished more in his 32 years on the planet than most people could achieve in multiple lifetimes. Fortunately, the story of this forgotten hero is being revived, and residents of Philadelphia and visitors to our city can now visit a memorial to this remarkable person right next to City Hall.

Although his story is unique, Catto is one among many unsung heroes and heroines who fought to expand civil rights and promote equality a full century before the civil rights movement of the 1960s.

Octavius V. Catto: A Legacy for the 21st Century

This biography of O.V. Catto is based on the research and writing of Dan Biddle and Murray Dubin, co-authors of Tasting Freedom: Octavius Catto and the Battle for Equality in Civil War America, published by Temple University Press in 2010. It was published in 2017 before the erection of the Catto Memorial at City Hall.

This publication was paid for by a grant from the Pennsylvania Abolition Society and donations from the generous organizations featured in the advertisements section on the final pages.

The design work was done by Stephen Megargee, editing by Murray Dubin and Tim Wood. The Abraham Lincoln Foundations acted as fiscal agent, and every type of help was provided by the indomitable V. Chapman- Smith.

If you want more information about any aspect of this publication, please contact: